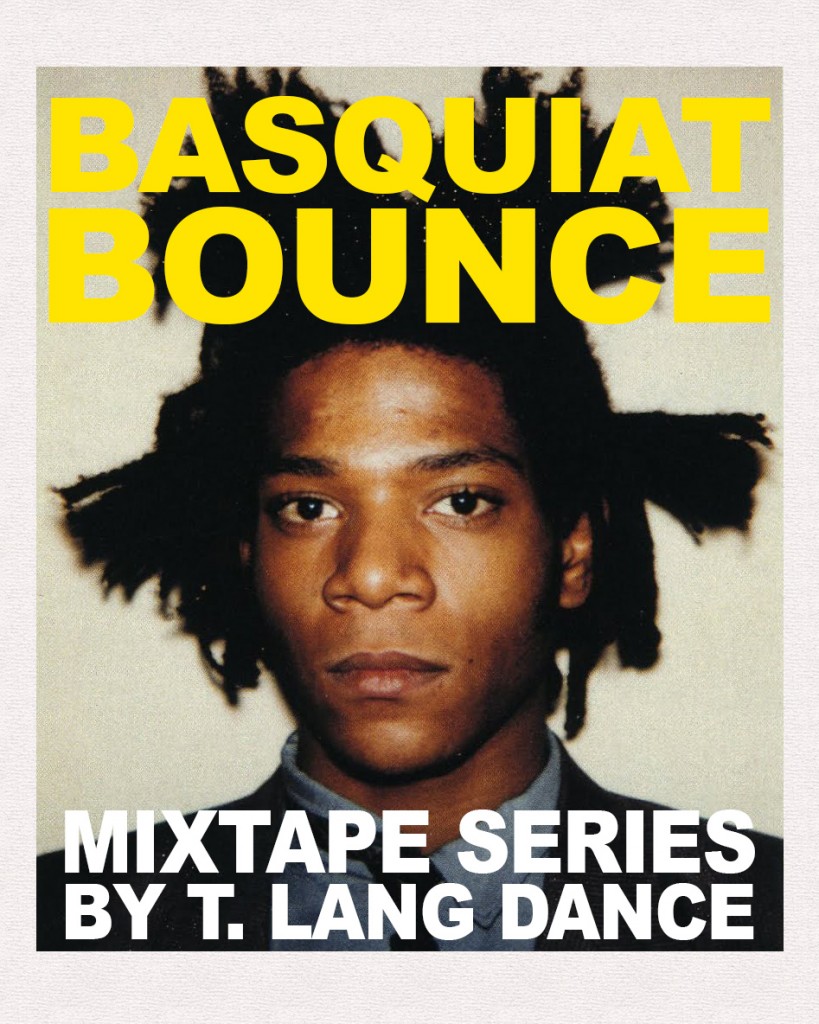 We’re so excited about our partnership with The High Museum of Art’s Basquiat exhibition,
we decided to put out a Basquiat-inspired mixtape series! Each member of our company
has created a playlist that reminds them of the prolific JMB. Check out T. Lang’s mix:

What appears to be spontaneous, free, entangled was a strategy Jean-Michel worked endlessly to appear as an illusion. Similar to dancing artists who tirelessly work inside their form, practicing riffs and patterns and tones, appears to the viewer another spontaneous improvisation when in actuality, it is incredibly calculated; like a seasoned jazz musician intelligent and talented to soar high on the notes. This perceived spontaneity, this randomness in improvisation is the artist displaying uncountable hours of practice…. And the practice of uncovering the unconsciousness. We, the artist, allow the viewer to see an unmediated access to the depths of our thoughts processes our vulnerabilities. The replaying of life experiences that affect dynamics and shape the outcomes. I echo the dancers in my company who critically analyzed the crafting of his work. However, my vantage point sees something different yet all too familiar, overlooked and repetitive even today.

Jean-Michel’s ambition along with his work always drew me in to know more about him, the man not the artist. The vibrancy, the rhythm, the patterns, the repetition, the density and the sparseness, the scratches etc.. I could go on and on. And one night I lit a candle and he and i had a session. It is as if he and i were dancing together, like we were in an intimate relationship….he whispered gently in my ear and told me with every breath of his truth, that I was his Queen…not his venus… However, It was as if he knew all the buttons to push on me and expose my fiery rage, he pushed buttons that threw me off….one momentIi am moving tenderly then he said something to me so insolent that i became aggressive, like he pushed the peace right out of me and he figured out how to make me speak lightning bolts, he twisted and chopped up my words when I begged for him to see me – I begged for him to honor me, he pulled stunts on me all night that was beyond destructive that the tears I cried he took and bathed in. his disappearing acts, his inconsistencies of kindness drove me to write spells only to scratch them out so he could see I have power too… he occupied my space in this moment that he should have paid a portion of my mortgage but his ass never offered. He and I had to stop and have a real heart to heart conversation…. It was deep too! I lit a new candle… But we had too before i showed him any more of my moves. In that heart to heart conversation… I understood his Peter Pan act. He was stealing my moves and putting it into his own work right in front of me. He took some of my words that were written down in the spells and put it on his work. He is occupying my space without contributing value like the “come up boys” my uncles warned me about. Inside the session’s real talk moment, I thought he and I came to an agreement about why love should not be used as a manipulation… And just like that he ghosted, ignoring me, pretending not to see me. Cold blooded and calculated.

In Jean-Michel’s work, I see the spectrum of feminine rage energy captured on canvas. Furthermore, I can only count on one hand out of the thousands of works he created, women who look like me honored with his stroke. I take that as if he was not checking for queens at all in his day. They were also there at the Mudd club Jean-Michel! For sure at Pallidum and hell yeah at CBGB. With the session we just shared, I know you saw your reflection but you for some unknown reason you could not look too long deeply into my eyes.

My fascination and curiosity of Basquiat’s work triggers a deeper connection for me… his behavior towards women, vulnerability and the residuals of his love’s complexity struck a nerve. My playlist is for the Queens he overlooked, the Venuses he exploited and tortured for his youthful ambition and for young ladies who realized they dated a boy using them for the come up. This radiant child… if only he knew he could have eventually exploded into a righteous man. Geniuses have their blind spots too. We who have encountered him are all Widow Basquiats. We, that loved him, saw him in our own unique intimate way and only wanted to nurture the radiance The Presence bestowed in him. Either way, I still love and respect your brilliantly complex soul! We spoke the same language and danced in the same groove.

Basquiat Bash is TONIGHT May 6th at The High Museum of Art.